This keto pizza recipe has been in the making for 2 ½ years. Trial after trial felt into the "it's okay-ish" category... but I was determined to create the perfect low carb pizza for my friends on the keto diet.

The thing is, most of us tend to cheat on the keto diet when we feel deprived of certain foods we love. One of the most common cheat excuses in our vocabulary has been PIZZA night! We talked about this a bit on a recent video we did for a new frozen, ready-to-cook keto cauliflower crust pizza. Which is what we turn to when we're in a hurry or are being super lazy. (Yes, even we are lazy some nights!)

The evening I was working on what ended up being the final version of this low carb pizza crust, I had a house full of people. My sister was there with her two kids who have Cystic Fibrosis and she was busy with managing treatment in the living room which marries into our kitchen area. Mom was hanging out in the kitchen with me...offering quiet support and washing dishes as I dirtied them. And...our informally adopted 19-year old was in and out with her girlfriend. I had promised them all recipe samples.... and they were hovering near the kitchen awaiting their first bite.

Turning A 'Whoops!' Into A Roaring Success

Because I was chatting with my mom as I rolled out the dough, I accidentally rolled the crust too large to fit on my baking sheet. After berating myself for trying to multi-task during recipe testing, I decided just to roll up the edges of the crust. This turned out to be a genius move because it helped hold the toppings on the pizza and gave the finished pizza a beautiful crusty edge.

Finally, we put the pizza in the oven and I started rolling the other half of the dough. Once the second one was ready, I went to peek in the oven and squealed with joy as I saw the beautiful crust.

We let it cook until the cheese was beautifully browned on top and bubbling all the way through. The house was filled with the smells of the baking cheese, the basil in the pesto and the spiciness of the pepperoni... which was drawing a crowd.

As we sliced and sampled, we were all incredibly impressed... and I MIGHT have been jumping up and down for joy. Pizza IS my favorite food, after all.

When my informally adopted daughter's girlfriend bit into the low carb pizza she said "Um... this is diet food? This is the best tasting diet food I've ever had in my life".

And, that's my favorite thing about eating keto. With the right recipes and know-how in the kitchen we do NOT have to miss out on our favorite foods. In fact, the keto version of our favorite foods are often even better than the real thing.

In fact, my niece and nephew are super picky to the point of only eating certain brands of frozen pizza. We had put a frozen pizza in for their dinner and everyone laughed when I had the keto pizza and frozen pizza sitting side-by-side. Which one would YOU rather eat??

This is the best tasting diet food I've ever had in my life!

Before we get to the keto recipe, there's a few things I'd like to share with you so that you get great results when you make this low carb pizza recipe. First, let's talk about substitutions.

Can I Substitute This for That?

If you're sensitive to coconut flour, you can actually substitute a half cup of almond flour. Additionally, increase the xanthan gum by ¼ tsp.

If you want to substitute the almond flour for coconut flour, check out my coconut flour pizza crust recipe here. You'll note a number of differences.

As for other keto friendly flours on the market such as sesame seed flour, hazelnut flour and so on and so forth... I haven't tried making this crust with any of those. If you have some on hand and want to experiment, please do! Comment below or email me with your results. I'll be happy to publish those and of course...give you the credit. 🙂

When we use keto-friendly (gluten-free) flours, we need something to mimic the behavior of gluten that's found in wheat flour. Gelatin is one of the three ingredients in this recipe that is working to do that for us. Specifically, the gelatin gives the pizza crust a more real pizza crust like chew. You can omit it but it won't be quite as good. Fortunately, gelatin is pretty easy to find and an inexpensive ingredient.

If you can't find gelatin, other viewers have reported that using an additional teaspoon of xanthan gum works well. But, I notice the best texture when you use gelatin.

The xanthan gum in this recipe adds more structure to the pizza crust so that when we pick up our slice, it doesn't droop and fall apart.

Actually, the cheese and gelatin are working together with the xanthan gum to mimic the binding properties of gluten found in traditional wheat flours. Omitting it means you'll have less structure in the dough.

The chilling time in this recipe is important for two reasons. One, we want to allow the coconut flour time to absorb the moisture so you get the best results possible. Twenty to thirty minutes in the fridge allows time for this to happen.

Keep this trick in mind any time you use coconut flour. If the mixture is too runny... just give it some time to rest. You'll be amazed at how much liquid coconut flour soaks up.

Second, we want the cheese in the recipe to firm up so that handling the dough is easier. You can actually make this recipe ahead and put it in the fridge overnight. It's a little tougher to work with the next day so you may want to pull it out and set it on the counter an hour or so before you're ready to roll the dough. If you don't have time, you'll just have to put a little muscle into rolling out the dough.

Here's are the ingredients you'll need to make this low carb pizza dough:

What About The Pizza Sauce?

Great question!! If you don't have time to simmer up your own homemade pizza sauce or want to keep the carb count as low as possible here are a few alternatives that we use.

Find a pesto sauce at the store without any added sugars and use this for pizza sauce. For those of you with big, beautiful gardens... plant and harvest basil and make your own. My mom does this for me regularly so I always have a supply of pesto on hand. In fact, I should probably get her recipe so I can post it online for you.

Use ranch dressing (without any added sugar) as a pizza sauce. We really like using Primal Kitchen's for this. It tends to be a bit thin so we will mix in a quarter teaspoon of xanthan gum to thicken it up before spreading it on the crust.

This was a random invention of mine one night when we had absolutely nothing in the house to use for a pizza sauce. It turned out really well and we use it from time to time when we're looking for a white sauce. All you need is an ounce or two of cream cheese. Soften it in the microwave for about 30 seconds or until it's easily stir able. Then mix in a tablespoon of Italian seasoning and a quarter teaspoon of salt. Mix it all together and then smear it onto your pizza crust. It is very important to warm the cream cheese so it is mixable and spreadable.

This pizza is so flavorful, you could just skip the sauce all together. Instead, sprinkle a little basil or Italian seasoning directly onto the crust before topping. What a delicious and easy hack skipping the sauce is! 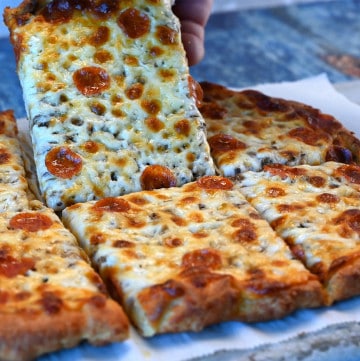 Prepare To Roll The Pizza Dough

Keto Portabello Pizzas
These keto pizzas are rich and satisfying. Each pizza is approximately 5 total carbs or 4 net carbs excluding the pizza sauce. There are so many keto options for pizza sauce, I opted not to include it in the final count. You can use very low carb options such as alfredo sauce, olive oil & herbs, ranch dressing or even spinach artichoke dip. Enjoy!
Check out this recipe