Hey, it's Health Coach Tara and Jeremy, and today we are reviewing the Real Good Foods breakfast sandwiches. I'm going to share some of my pro cooking tips so you can get the best results.

Before we jump in, we would like to know, are you a sausage or a bacon breakfast sandwich person? Or do you need both? Post in the comments and let us know your vote.

Real Good Foods does have a third breakfast sandwich flavor that is not available locally for us, and that is turkey sausage. So if you find the turkey sausage at your local store, we would love to hear what you think of that particular flavor in the comments.

Convenience In A Box

Found At Your Local Store

So we just got back from vacation, and are super thrilled to have these Real Good Foods breakfast sandwiches this week. We stopped by Walmart on our way home to pick them up. We love that these are now available in a local store.

You know how it is when you come back from vacation or a trip. You just don't have a lot of time to get ready for the coming week. So we were like, "what are we even gonna eat this week?". And then Real Good Foods breakfast sandwiches came to mind!

First of all, we love these because they are a great price and there are four sandwiches in a box. It makes our week easy.

This will be four meals for me throughout the week. And the macros on these are really good. I do want to point something out in the labeling on the boxes.

A Walk Through The Labelling

On the sausage product, you will see that it says 4 g of net carbs. So that's in the marketing on the box. But if you look at the bacon box, you will see that it says 7 g of total carbs. The actual net carbs on the bacon are three net carbs. They just didn't do the math on the marketing here on the box. I wanted to call that out to make sure you didn't compare these yourselves and get confused. That's just something to notice. 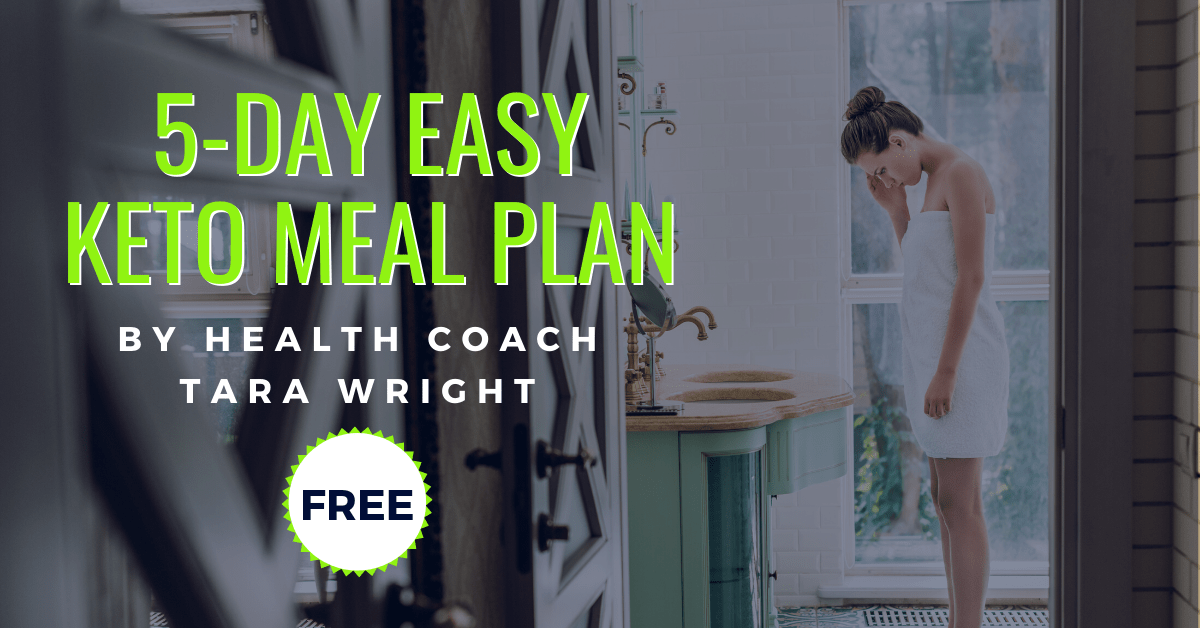 Walking through the labels on both of these... Right, so the bacon one is 113 grams for one sandwich. That's the total grams, and that's 280 calories with 18 g total fat, eight of that being saturated. It's got a good amount of cholesterol in it and a decent amount of sodium, 600 mg.

The most interesting thing to those of us who follow the keto diet is that this has 7 g of total carbs, 5 g of dietary fiber, 2 g of sugar, and then 19 g of protein. This is pretty close to equal ratios of fat to protein, which Jeremy really likes because he doesn't want to go too high on his proteins, and that's pretty easy for him to do. He eats a lot of meat for the protein during the day, so that's a nice even mix.

The let's talk about the difference between the calories and the sausage. With the bacon, you've got 280 calories, but the sausage brings 450 calories, so the sausage breakfast sandwich for Jeremy is like the perfect lunch. It's like 450 calories. It's everything he needs. Maybe a side salad or a vegetable on the side.

The sausage has 35 g of fat, which is a lot more than the bacon has, of course, which is 18 g. So this sausage sandwich is 149 g, so there's just more meat there. There's more product, which you expect. Bacon is small. Sausage is meatier... which is a good way to describe it.

So you could if you like bacon and you'd like both the bacon and sausage. You could easily do that by just adding bacon to one of the sausage sandwiches.

The ingredients on the Real Good Foods sausage versus bacon breakfast sandwiches are identical except for the meats. This would be just the bacon versus the sausage, everything else is the same.

The bun on these is a cauliflower bun made from cauliflower, mozzarella cheese, parmesan cheese, coconut flour, dried whole egg, almond flour, a little bit of tapioca starch (as a binder), some liquid whole egg, some sodium bicarbonate, salt, xanthan gum (again, another binding element) and salt and spices. So the buns are identical. Then the cheese is cheddar cheese in both of these sandwiches too.

There's like one step that you have to do, and that is wrapping it inside of a paper towel. I’ll just re-iterate the cooking instructions here: remove the sandwich from the box and wrapper and wrap it tightly in a paper towel. Now we like to wet our paper towels because we think that it kind of helps to trap some of the moisture when you're microwaving. This time we’re just going to follow these instructions as they are and use a dry paper towel.

So wrap it in a paper towel. Then microwave the sandwich for 50 seconds. Flip the sandwich when the timer goes off, and then microwave it for another 45 seconds. Total cooking time is one minute and 35 seconds per the box. So we will do that.

Jeremy's tightly wrapped the sausage sandwich we’re starting with first and is going to pop that in the microwave. And then put 50 seconds on the clock.

We’re going to talk you through how we like to “properly” cook your Real Good Foods breakfast sandwiches by deconstructing it.

So the thing Jeremy likes to do with these breakfast sandwiches is to separate them for cooking. He found that the microwave tends to be the enemy of well-cooked food sometimes... they tend to over-cook some aspects of food and undercook other ones. This of course has nothing to do with the product or brand you purchase, it's just par for the course when using a microwave.

With breakfast sandwiches, the cheese is the item that suffers the most. The cheeses just start melting before the cooking process is over...which makes the cheese just go all over the place. And that's why we don't cook it in that first 50 seconds because we like to have all of the cheese in the places it's supposed to be.

So we pull them apart which typically happens pretty easily with a knife. Just pry apart the meat from the egg and the cheese. The cheese can be a little problematic sometimes from the egg.

Once it’s cooked for the first 50 seconds you’ll have your meat, bun, and egg. Grab the cheese, put it all back together, and cook it for the remaining 45 seconds.

The thing I do differently than Jeremy is sometimes I will pop the bun portion in our toaster. I just really love toasted buns when making a hamburger or when making our own breakfast sandwichs, I'll always toast the buns so definitely try this hack yourself.

And if it's a day where you need more fat, just add butter to the buns and then toast them. This is a good idea because the cauliflower has a lot of moisture. And so one of the things you'll notice when you take these out is that they are a little damp or moist because cauliflower just has a lot of moisture, so toasting it would be a great way to kind of takes out some of that moisture.

One thing to know if your dairy-free and want to eat these, just take out the cheese. Now there is a little bit of cheese in the bun part, but it’s such a small amount...

So I like the maple syrup, but something Jeremy likes to do is punch up the heat a little bit by just adding something like Frank's Red Hot Sauce or something similar to it. Just a couple drops on top of the meat is good to give it a little bit of spice and a kick.

Another quick tip is to pair this with the side of my chipotle aioli. I just like to put a tablespoon or so either on the side and dip it in or sometimes I’ll just put it on the back of the bun and add it to the sandwich. That chipotle really just kind of gives it a nice, smokey, robust flavor just kind of mixes things up a little bit.

That's important to note, we are cooking with a 1200 watt microwave, so if you have a lower power microwave, it might just take a little bit longer to get hot. Now with your bacon, it looked raw, but couldn't tell, so with your bacon, you do you want to make sure that your bacon gets cooked and you could if you like really crispy bacon.

So we have the traditionally cooked Real Good Foods Sausage Breakfast sandwich. This actually turned out really nice. This is a really nice looking egg for a product that's frozen. A lot of times frozen breakfast sandwiches don’t even look like real eggs. It looks like it was powdered eggs at some point, but this looks like eggs.

Okay the bacon one is next. No magic method for the bacon one, it's pretty much the same thing. The bacon's thinner, but otherwise they really are about the same size.

The difference in the weight of the sausage is 149 g, where's the bacon is 113 g. What's interesting about this bacon is that it's like real strips of bacon not some kind of weird Canadian bacon or something larger. It's like it's strips of bacon that you could identify which is always a great sign of quality product.

These Real Good Foods breakfast sandwiches both turned out really nice. They were really easy to make, the quality of the product is really evident and they really tasted great!

I know one question you probably have is “where the heck can you go to buy these to try them out?”

Walmart is carrying these now. Target is also carrying these, as well as Kroger Schnooks, Hyvee, and Walgreens. We've seen them all over the place.

If you go to the Real Good Foods website, they have a store locator. Just enter your zip code and find exactly what different products are available in your local stores.

Now you can also order online if you live somewhere rural or there's just not a store in your area that carries these. Go to the Real Good Foods website to order online and use our coupon code: TARAKETO which saves you 15% off your first order.

We have all kinds of great review videos coming soon so stay tuned!

Disclosure of Material Connection: Some of the links on this website are "affiliate links". This means if you click on the link and purchase the item, I will receive an affiliate commission. Please know, I only recommend products or services I use or have used personally. I am disclosing this in accordance with the Federal Trade Commission's 16 CFR,Part 255: "Guides Concerning the Use of Endorsements and Testimonials in Advertising".