Starting a Ketogenic diet was a big lifestyle change.

I quickly realized the only way we would ever stick with a keto lifestyle over the long haul... was to get really good at making alternatives to traditional foods.

Things like bread, pizza, casseroles and desserts. On the top of my husband's list was keto bread and keto buns. We wanted a bun alternative that had the texture of bread and that would hold up to a hearty sandwich. Bacon, Lettuce, Tomato Cheese....

Basically we wanted real bread--but we wanted it to be keto!

It took me a few months to experiment with keto cloud bread. I had tried it from a friend and found the texture odd and a bit eggy. So, I'd discounted it and put it on the bottom of my "things to try" list. When I finally got around to trying it, and made a few tweaks, I have to admit, I'm impressed!

Compared to the , this version of keto cloud buns yields a firmer much "breadier" result. It holds up well for all types of sandwiches including hamburgers! A few tweaks made a big difference. Give it a try and let me know what you think in the comments below!

Watch my video for an overview before making this keto bread recipe. It helps to know what to expect in advance ?

The Egg Whites: A Critical Step for Keto Cloud Bread

One crucial step is getting the egg whites separated and whipped correctly. Make sure that NO yolk accidentally drops into your egg whites. ANY yolk in your egg white will prevent them from whipping correctly and will cause this recipe to fail.

If you aren't experienced at separating eggs, consider investing in an inexpensive egg separator. Or, separate your eggs one at a time over small bowls so that if you mess up you only have to discard one egg instead of all the eggs. Practice makes perfect!

Cream of Tartar–Is it Essential?

The short answer is yes! Cream of tartar stabilizes the egg whites and is critical to a delicious keto cloud bread.

Cream of tartar is an acidic salt that is a byproduct of wine and grape juice making. Cream of tartar helps the egg whites get to their full “volume” ability.

Egg whites can actually whip up to eight times of their unwhipped volume. Cream of tarter also helps prevent the whites from being “over-whipped” which is great for beginning cooks!

You'll have a prettier finished product when you incorporate cream of tartar into your egg whites.

What Can I Substitute for Cream of Tartar?

There's really not a great substitute for cream of tartar. Some cooks use lemon juice –but it's not quite as effective. I've also heard of using a pure copper bowl–but this imparts a “rose” color on the eggwhites.

Your best bet is to run out to the store or head over to Amazon and order yourself some cream of tartar. You'll use it often in keto cooking!

Cream of tartar is a keto pantry staple and is used in recipes from keto bread to keto pastries and is a key ingredient for making your own baking powder.

Acacia Fiber– Can I skip it?

You can make this recipe without it. Or you could substitute a tablespoon of Psyllium Husk Powder or even Flax powder.

The acacia fiber lends this recipe even more of a “real bread” mouth feel. I didn't notice the eggyness at all when eating this version. As I mentioned before, with the original version of Cloud Bread– I couldn't get passed the eggy texture. The Acacia Fiber combined with the xanthan gum solves this problem!

You'll find Acacia fiber many of my Keto Baking Recipes and it's also a great fiber supplement to use while on a Keto diet.

Here's a few things that are helpful in making this keto cloud bread: 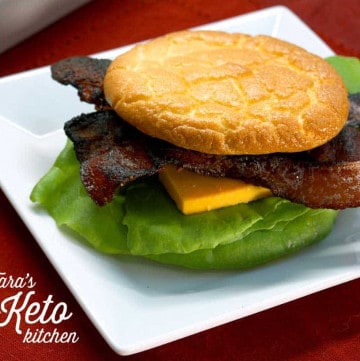 * *Nutrition facts provided as estimates only.  The nutrition facts for our Keto Cloud Bread were calculated using Cronometer. All of our recipes are available in Cronometer if you are a Gold member and friend request me at tara@wholebodyliving.com through Cronometer. Click here to save 10% off of Cronometer Gold or try it out with a free account.

« Move Mountains
Be Who You Need To Be »