Chocolate Keto Cupcakes were high on my list of things I must figure out when I began my keto journey.

After a number of trial and errors, I have managed to create a cupcake that is indistinguishable from the real thing. These are cupcakes you can eat and feel good about.

In fact, I made these for my daughter's 13th birthday. She couldn't believe these are grain free, sugar free and "mom-approved". Of course, I didn't tell her until after she'd eaten her cupcake. She thought I was joking with her...and then when she realized I wasn't she asked for another one!

As a rule, when you are baking keto–Substitutions don't work well. In this section I'll cover why this is and offer substitute suggestions where I can.

Can I Substitute Almond Flour?

Many have asked me if you could substitute almond flour here. The short answer is no. Coconut flour is a highly absorbent flour. For 1 cup of traditional flour, you only need to use ¼ cup of coconut flour. It's an amazing flour to bake with–once you figure out all it's quirks!

This is why we don't use very much coconut flour in this recipe but it still turns out a dozen cupcakes. Almond flour, on the other hand, is not absorbant at all. Swapping it out here will result in a wet and soggy end result.

Coconut flour absorbs liquids and almond flour does not.

Almond flour will also brown faster, so keep that in mind whenever you cook or bake with it. You'll want to use a lower heat setting.

My original keto cupcake recipe does call for a combination of both types of flour– it's a great recipe–but gives you more of a muffin texture than a true cupcake texture. I'll be reworking that soon!

Using coconut flour allowed me to achieve an almost identical cupcake texture when compared to a traditional cupcake. I've also managed to leave it moist and not dry–which can be a challenge when baking low carb. I recommend investing in coconut flour. You'll find it in many of my keto recipes.

Here's a few things you will need to make these chocolate keto cupcakes: 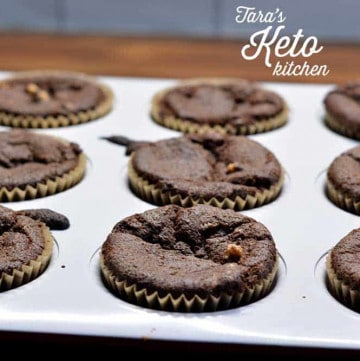 Nutrition facts are for keto cupcakes only and are provided as estimates. Nutrition facts do not include sugar alcohols. Note: You can swap out the baking soda and cream of tartar for 1 tsp baking powder.