When I started playing around with Keto Cheesecakes, my question quickly became "What in the world am I going to use for a keto cheesecake crust?"

Next, I tried a crust-less cheesecake. That turned out okay, but I really wanted something with a crust!

Then I thought about coconut!

We LOVE coconut around here!

A star was born in this three ingredient keto cheesecake crust. All you need is shredded unsweetened coconut, a keto friendly sweetener and coconut oil.

A quick tip before we move on...Make sure you allow enough time for the crust to cool while making this.

Not on board with coconut? Check out my keto cheesecake crust that is made with ground walnuts and tastes a lot like a sugar cookie crust!

All You Need Is A Few Simple Ingredients 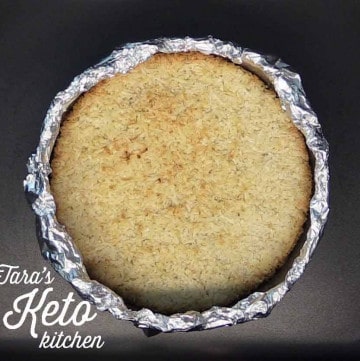 Nutrition Information does not include sugar alcohols from Bocha Sweet.

Have an Idea or Recipe for Keto Cheesecake Crust?

« Keep It Open
Make An Impact »